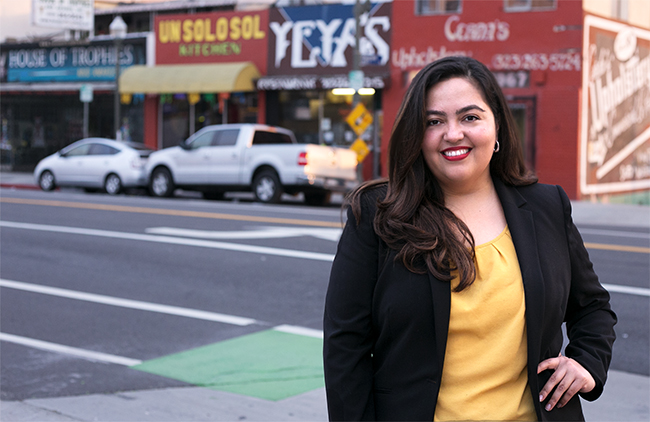 We are living in a moment of urgency. A moment in which our country is demanding new vision, leadership and courage. It is obvious with the results of our recent presidential election that the same establishment “politics as usual” don’t work anymore.

Large segments of this country have been ignored by our representatives in Washington DC. The 34th Congressional District is no different. Voters now have an opportunity to send a message to our nation’s capital that they don’t agree with the way things are headed. We can send a representative to replace Xavier Becerra who will stand up for the people of this district and stand up to President-elect Trump.

I am running to represent the 34th because the people of this district who reflect the communities who woke up on November 9th feeling assaulted by our nation’s politics deserve a fighter who will go to Washington who is unafraid to say that we all should Fight for 15, make sure there is Not One More Deportation, that Black Lives Matter, and Mni Wiconi (that Water is Life!).

I am running because I want to continue to build on a grassroots movement that has been longing for something different. Something that creates a fire in us all to believe that we can create a country that is fair and just to all. A country that values our most vulnerable communities, a country that thrives with innovation and entrepreneurship, a country that puts people above politics — and “politics as usual.”

Over the next four years, we will be threatened with political demagoguery meant to divide us and instill fear of the unknown. Our country should not be a country of fear, but a country of promise.

Throughout his campaign we heard what President-elect Trump thinks of the “inner-city”. Well, I’m here to say that I am the inner-city. We thrive, we live and we are resilient against all odds. We face incredible challenges and find resourceful ways to move forward. We are not criminals or rapists or terrorists or people that don’t have a voice. We are the future of this country and we are taking our rightful place in it.

I’m choosing to show up because I want a seat at the table to advocate for the people who need it most. Public service is a privilege, not a game of musical chairs. I plan to put the people first.

This campaign is for the children who fear their parents might be deported and are unable to vote.

This campaign is for our brothers and sisters currently incarcerated and detained, those who became part of the school-to-prison pipeline and those seeking rehabilitation.

This campaign is for college students wondering how they’re going to find jobs in a declining economy while indebted with student loans.

This campaign is for the person facing homelessness on skid row who goes hungry and lacks shelter every night.

This campaign is for ALL working people who demand their country do right by them, that demand the 1% pay their fair share and who want to send their kids to college without going broke.

This campaign is for my parents who emigrated to the U.S. from El Salvador and Mexico, started a new life and worked hard to provide a safe home for myself and my sisters. They’ve instilled in me a strong work ethic grounded in honesty and integrity. It’s been fundamental to my work as a journalist, a political speech writer, in my work in local government, labor unions, coalition building, grassroots organizing, GOTV efforts and the California Democratic Party.

For the past ten years I produced a community-based program on Power 106FM called “Knowledge is Power,” where I’ve listened to the issues Angelenos faced. I’ve talked to elected officials, holding them accountable to their promises, I’ve talked to business and nonprofit leaders about our city and sought solutions. I’ve listened to parents cry for the safety of their children in a time of increased gun violence. I’ve listened to veterans who have served and feel immense honor in their work.

In the 34th congressional district all these voices matter. This is where I call home.

I grew up in City Terrace, I went to El Sereno Middle School, Roosevelt High School in Boyle Heights, East LA College and received a Bachelor’s at Cal State LA and a Master’s at USC. I lived in Highland Park and saw first hand how gentrification changed my neighborhood within a few years. Recently, I bought a home in Boyle Heights, just blocks from where I lived when I first immigrated to Los Angeles.

As a child, I fled my home in El Salvador because of war and violence. At the age of 13, I learned I was undocumented and eventually I was able to obtain legal status. I was fortunate while so many others haven’t been. I take that blessing very seriously. Before my 21st birthday, I became a citizen and for a few years I was the only voting member in a family of seven. My journey is not unique. There are countless people like me who are hard-working members of our society who thrive under dire circumstances. It is the promise of what could be that drives me forward.

From late October to early December, I was at Standing Rock. I witnessed and experienced first hand egregious human rights violations by a militarized police against peaceful water protectors. Inhaling the toxic fumes of tear gas is something that I won’t soon forget. The resiliency of everyday people from all backgrounds standing together to protect our natural resources gave me courage. Yet, each day I wondered, where is Congress? Where is the administration? Why are politicians silent? These questions made me realize the dire need of new leadership to move our country forward. Unapologetically progressive, 100% for the people. I realized it was time for me to stand up. Stand up for Standing Rock, stand up for our country.

All of these reasons and so many more is why I’m running to represent the 34th.

THIS CAMPAIGN IS MORE THAN ABOUT ME — IT’S A MOVEMENT OF PEOPLE WHO WILL FIGHT FOR PEOPLE. Together, let’s build a campaign about the possibilities of what can be and what should be. I ask that you vote for me, a homegrown candidate that will advocate for you and your families. I am ready for this challenge. I am ready to work and I am ready to serve. ayrex login